Searching for the island of stability

A team of nuclear and radiochemistry experts at Lawrence Livermore is tasked with investigating the chemical and physical properties of the heaviest human-made elements. These researchers build on Livermore’s long history of accomplishment in fundamental nuclear research, with spectroscopic, chemical, and decay studies dating back to the 1950s.

In 1998, Livermore scientists collaborated with Russian scientists at the Joint Institute of Nuclear Research in Dubna, Russia, to create element 114 (flerovium). The first atom survived for 30 seconds before it began to decay, a spontaneous process that leads to the creation of another element with a lower number on the periodic table. This lifetime may seem brief, but it is millions of times longer than those of other recently synthesized heavy elements. 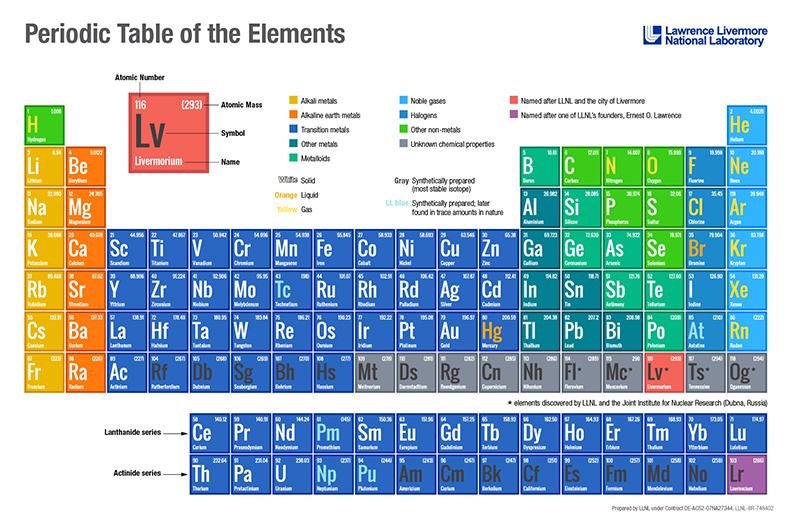 Periodic table of elements, which includes the six most recently discovered elements.

In 2000, the team added element 116 (livermorium) to the periodic table with the creation of three atoms of the element in a series of experiments. The creation of elements 116 and 114 involved smashing calcium ions (20 protons) into a curium target (96 protons) to create element 116. Element 116 decayed almost immediately into element 114. These scientists also created element 114 separately by replacing curium with a plutonium target (94 protons).

In 2003, the team of scientists observed atomic decay patterns that confirmed the existence of element 115 (moscovium) and element 113 (not yet officially named). In these decay chains, element 113 is produced via the alpha decay of element 115. 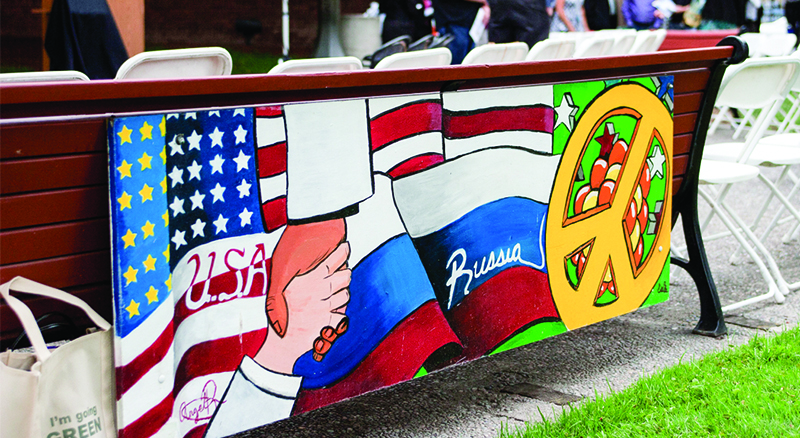 A mural at Livermorium Plaza in downtown Livermore, California, commemorates the U.S.–Russian collaboration that led to the discovery of six heavy elements.

In 2010, the LLNL–Dubna team established the existence of element 117 (tennessine) from decay patterns observed following the bombardment of a radioactive berkelium target with calcium ions at the JINR U400 cyclotron in Dubna. The experiment depended on the availability of special detection facilities and dedicated accelerator time at Dubna, unique isotope production and separation facilities at Oak Ridge, and distinctive nuclear data analysis capabilities at Livermore.

Having reported the discovery of 6 new elements—113, 114, 115, 116, 117, and 118—the collaboration shows no signs of slowing down. The Livermore team is working with its Russian colleagues to find more isotopes of 118, with the Russians building an additional dedicated accelerator at Dubna to aid in superheavy element discovery and production.

Getting to the End of the Matter, Science & Technology Review magazine, December 2016

Elements beyond atomic number 104 are referred to as superheavy elements. Although superheavy elements have not been found in nature, they can be produced by accelerating beams of nuclei and shooting them at the heaviest possible target nuclei. Fusion of two nuclei—a very rare event—occasionally produces a superheavy element. They generally only exist for a short time.

The discovery of heavier and heavier elements brings researchers one step closer to the “island of stability,” a term in nuclear physics that refers to the possible existence of a region beyond the current periodic table where new superheavy elements with special numbers of neutrons and protons would exhibit increased stability. Such an island would extend the periodic table to even heavier elements and support longer isotopic lifetimes to enable chemistry experiments.