Fate and transport of radioactive isotopes

For decades, Lawrence Livermore researchers have worked to obtain a detailed understanding of the environmental behavior of radioactive elements such as plutonium and uranium through fieldwork, experimental, and modeling efforts. The research is driven by the Laboratory’s historic roles in assessing the nation’s nuclear stockpile, ensuring the safe storage of nuclear waste, and evaluating the fate and transport of radioactive isotopes in the environment.

Determining the dominant biogeochemical processes that control actinide transport in the soil and groundwater is enabling scientists to more accurately predict long-term transport behavior. For one such effort, Livermore researchers have studied how plutonium adheres to mineral colloids—microscopic particles found in all waters—over environmental concentrations spanning more than 10 orders of magnitude.

Using a transmission electron microscope, the team characterized the attachment of plutonium colloids on minerals at the nanoscale. The experiments showed that each mineral colloid interacts with plutonium in a unique manner. One form of plutonium, nanocrystalline Pu4O7, readily precipitates on goethite, an iron oxide and a common constituent of soil.

The research indicates that plutonium surface precipitates become distorted as they are deposited, which apparently strengthens the bond between goethite and plutonium. Findings were confirmed through examination of samples taken from contaminated sites in the United States and Russia with a nanometer-scale secondary-ion mass spectrometer. 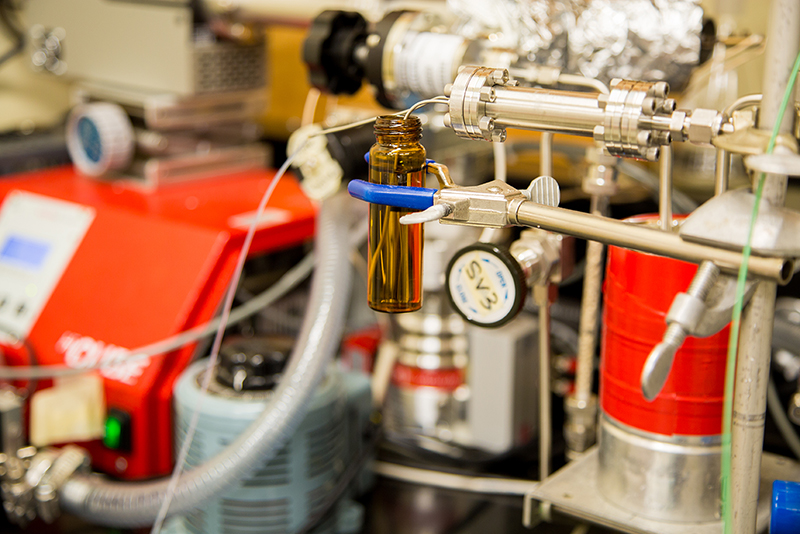 Livermore researchers are also applying their expertise in isotope geochemistry for other purposes, such as studying the composition of the Earth’s mantle and developing new methods to help characterize California’s underground aquifers. Using naturally occurring and anthropogenic radioactive isotopes, researchers can determine when groundwater was recharged from surface water that percolated down through the soil into the aquifer. Knowing the recharge time helps Laboratory researchers determine the source of contaminants and the flow of groundwater. Researchers also use the isotopic composition of pervasive pollutants, such as nitrates, to determine the source of contamination.

Livermore scientists use a number of tracers to determine how long groundwater water has been in the subsurface. Xenon, a noble gas, is one of the tracers they use to test groundwater that is anywhere from weeks to months old. Xenon is introduced to a recharge pond or injection well and then detected at a monitor or production well using a noble gas membrane inlet mass spectrometer—a simple benchtop instrument developed at Livermore. The time between introduction and detection is related to groundwater age. Lawrence Livermore is one of two high-throughput noble gas mass spectrometry laboratories in the nation with the capability to measure tritium and noble gases.